MALS is proud to feature Dr. Robert Kochersberger! Dr. Kochersberger is a member of the English Department at NC State.  His spring seminar focuses on how airplanes have had a significant impact on commerce, diplomacy, warfare, recreation, and the environment;  Additionally, the course covered the basics of aerodynamics, internal combustion, navigation, safety and learning to fly.

Where are you from? What brought you to North Carolina/NC State? What is your academic and/or professional background? 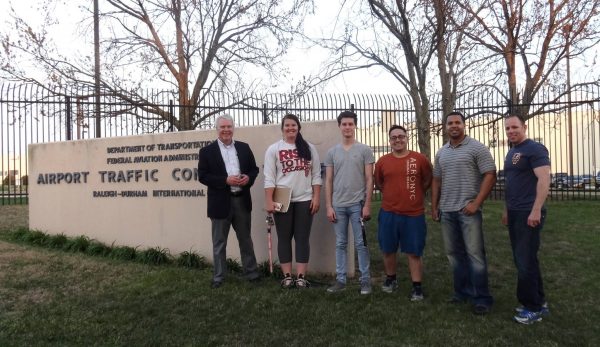 I grew up in a tiny village in rural western New York state called Sinclairville. I enjoyed school and working for the newspaper, which led me to my eventual career in journalism. I moved to Raleigh in early 1986 as a “trailing spouse.” My wife, an Episcopal priest, was called to be chaplain of St. Mary’s School, so I left my teaching position in the State University of New York system and came south. I began at N.C. State in January 1986 and have been here ever since.

What brought you to your field of study? When/Why did you become interested in your area of study/research?

I worked for daily newspapers in New York state from 1970 to 1979, full-time for most of that, but also some summer and part-time positions. Both of my parents were in education, so I expected to head in that direction myself. I began graduate education with a master’s degree from Syracuse University, followed by my PhD at the University of Tennessee.   My main research interest has been the American muckraking journalist Ida Tarbell, whose work in the early 1900s exposed the unethical business practices of John D. Rockefeller and led to the breakup of the Standard Oil Co. She was about the most famous woman in America for a while as a result. I am one of two experts on Tarbell, and I was even hired to be the official consultant for the U.S. Postal Service when it issued an Ida Tarbell stamp.

I have directed both the undergraduate and graduate interdisciplinary programs at N.C. State. I feel strongly that an interdisciplinary approach can be just right for some students. In my current MALS seminar, on aviation, my students are looking at a field of study that is quite unfamiliar to them. (Of course, they all have been passengers on planes!) The interdisciplinary approach allows them to blend seemingly unrelated areas of study with aviation, like women’s issues, drug trafficking and the nature of innovation. My students this semester have some interesting field trips (FAA control tower at RDU and Seymour Johnson Air Force Base) and guest speakers (experts on the Wright Brothers, the Brazilian aviator Santos-Dumont, and CIA anti-drug operations in Colombia).  A major interest of mine also has been international academic work, which I think is connected to interdisciplinary work as well. I have been a Fulbright professor in Yugoslavia, Egypt, Thailand, Slovenia, and Slovakia.

Two fun facts (in addition to having a pilot’s license) are that I was a contestant on “Jeopardy!” in 2014. (I didn’t do very well, but it was a lot of fun.) Also, I am learning to play the mandolin. 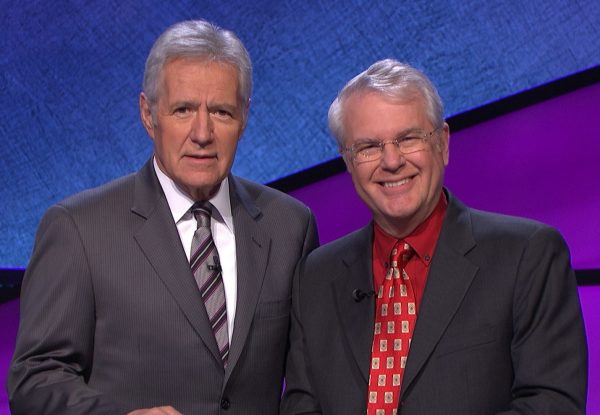 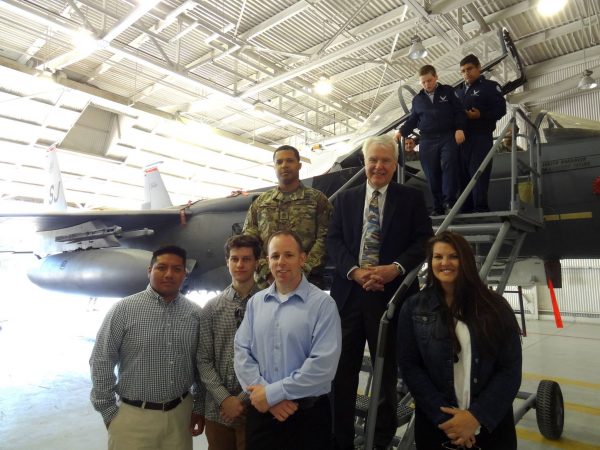 Dr. Kochersberger pauses during their visit to Seymour Johnson AFB to snap a photo with some of the MALS students taking his aviation seminar