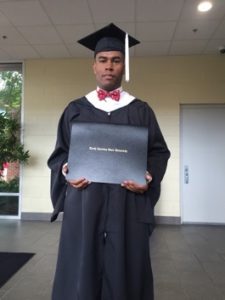 Merles was born in Cleveland, OH but moved to Atlanta, GA during his freshman year of high school.  His family still lives in Atlanta so he claims both as home–though he roots for Cleveland sports!  He is active duty military and was stationed for three years in Raleigh-Durham to serve as the Marine Officer Instructor for the Naval Reserve Officer Training Corps (NROTC) at NC State (Duke and UNC as well).  He has orders to study next at the College of Naval Command and Staff at the Naval War College in Newport, RI.

He enlisted in the United States Marine Corps in 1996. Merles received a B.S. in Business Administration from The Citadel, The Military College of South Carolina and was commissioned in 2002. He is currently a Marine Logistics Officer and 2016 marks his 20-year anniversary as a Marine.

He chose MALS because of the interdisciplinary approach. “I really appreciated and was interested in the interdisciplinary aspect of the program.  The MALS program design allowed me to view my research from different angles and from other disciplines.  This approach provided me with a greater understanding and a greater appreciation of viewing this (and other) problems from different perspectives.”

His final project was titled the “Crisis in America’s Cities Revisited.”  “I arrived at NC State right when our cities started to erupt from events rooted in continued social injustice.  I thought it would be interesting to unpack some of these issues.  At the onset of my research, I found a speech that Dr. Martin Luther King Jr. titled The Crisis in America’s Cities.  Many of the issues that he identified in 1967 are still present today.   These problems are complex and will require interdisciplinary approaches to solve them.”

The MALS program provides the opportunity to learn and interact with many different perspectives and viewpoints.  “I was able to build many valuable and professional relationships with the other MALS and graduate students that I met along the way.  The interdisciplinary approach I used in the MALS program will greatly enhance my future professional experiences because it developed and refined my decision-making process with an emphasis and appreciation for including other perspectives and disciplines.”