Simone is currently on staff at NC State University where she is a videographer and video editor with University Communications. She is the recipient of two Emmy® awards for her work with the weekly gardening show “In The Garden With Bryce Lane.” She is also an instructor at the Center for Documentary Studies at Duke University and the creative director and principal cinematographer of Pára Tudo! Productions, a production company she founded in 2006 with a group of friends from the United States and Brazil. 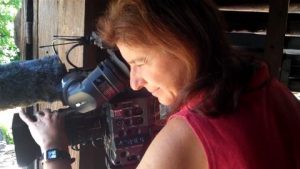 After many years working in broadcast, I was ready for a change. The hectic schedule and fast pace of television news not only left me exhausted but also depleted me of creativity. I needed to recharge my batteries and for me, that came in the form of the MALS program.

The interdisciplinary nature of the program attracted me immediately. The freedom to explore and draw from different disciplines changed my way of thinking about the world and about myself. I chose to pursue the area of documentary research and production in my studies since I had spent most of my professional life learning the technical aspects of broadcast. The classes and lectures were fantastic and I learned how the Spanish Civil War had an impact on artists worldwide, watched films made by directors I had never heard of, mourned for those who suffered by the horrors of the Holocaust, wrote a full-length screenplay and learned a thing or two about French gastronomy. As my final project, I used my newly acquired research skills to write and produce a documentary, “Heavier Than Air,” about Brazilian aviator Alberto Santos-Dumont and his claim to be the first in flight.
Today, I continue to rely on the skills I learned while getting my MALS degree. My current projects are almost all multidisciplinary in nature and having been taught to approach research from that same perspective really strengthens the content of my stories. Above all, the MALS program taught me to value collaboration and diversity of ideas and it has made me a more rounded professional in every area.