Faculty Spotlight: An Interview with Dr. Leila May 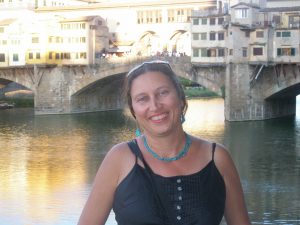 MALS is proud to feature Dr. Leila May! Dr. May is a member of the English Department at NC State.  Her seminar for Fall 2016 focuses on women writers of the nineteenth and twentieth centuries.

Where are you from? What brought you to North Carolina/NC State? What is your academic and/or professional background?

I was born in Stuttgart, Germany but came with my mother to California when I was about two years old.  I lived in California until my early teens, when my mother remarried a New Yorker, so I decided to go to a boarding school in Vermont.  My parents moved back to California a few years later, and I returned to California for college, where I studied literature and philosophy.  After taking time off during my studies to travel and live in Europe, I finally settled down, finished my undergraduate degree at Mills College in Oakland, CA, and was awarded a Mellon Fellowship for my graduate studies.  I spent time in Seville and Paris for a half year between college and graduate school in order to study Spanish and French (in those days a Ph.D. in English at Berkeley required 3 foreign languages) and then returned to California to get my doctorate in English literature at UC Berkeley.  When NC State advertised for a position in the Victorian Novel I applied for the job and was fortunate enough to get it!

What brought you to your field of study? When/Why did you become interested in your area of study/research?

I can’t remember a time when I didn’t love literature, and, even as a child, I already  thought of myself as a proto-teacher.  (I used to inflict lessons and homework on my cousins when we were scarcely old enough to be in elementary school.)  Some years later, as an adventurous but somewhat naïve nineteen-year-old on the island of Crete, I suddenly found myself being offered a position teaching English five days a week to schoolchildren of different ages, a number of them only a handful of years younger than I was.  Although woefully underprepared for the task at hand, I soon discovered that teaching is not only one of the most gratifying pursuits imaginable but that I have something of an aptitude for it.  I decided at that juncture in my life to dedicate myself to that profession.  As an undergraduate I discovered a passion for philosophy and learned that combining my interest in literature with philosophical approaches to those texts could be a productive combination.  I graduated from college with a double major in English and Philosophy.  Although I decided to pursue graduate studies in English, specifically the Victorian novel, I often still bring philosophy to bear on my own readings of literary works.

As my own academic background attests, I have always been interested in interdisciplinary studies, so when I was asked to serve on the MALS Advisory Board a few years ago, I was delighted.  I am teaching a course in the MALS program for the second time next semester and am looking forward to another very positive experience. MALS students are generally highly motivated, very interesting students with diverse backgrounds and life experiences, all of which makes for an especially lively interaction in class.  In fact, at a recent MALS reception for alumni and newly admitted students, I was told by one of the students from my earlier MALS seminar that the discussion amongst the students continued online for months after the semester had ended.  That is one of the many things that make teaching for the program so fulfilling.  It is rare these days that one has a mandate to go beyond the narrowly circumscribed terrain to which most students find themselves confined by the time they get to their graduate studies.  Our program gives them that opportunity, and it’s very rewarding to be a part of that process.

Tell us about your current research and academic pursuits.

I have recently completed a book-length study titled Secrecy and Disclosure in Victorian Fiction that will be published in August.